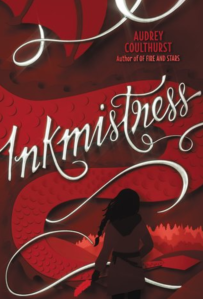 In the kingdom of Zumorda, the gods grant power to the people. The King rules with the power of all six gods. But regular citizens aren’t left out. They have the ability to Manifest, or merge with the spirit of an animal with the support of one of the gods. Having a Manifest allows someone to change shape into their bonded animal.

Asra doesn’t have a manifest. As a demigod, she has a far greater, more dangerous power; the ability to change the future by writing it in her blood. She has kept this power a secret all her life, afraid of what common folk would do to her if they found out her secret.

But Asra’s comforting life as a healer is completely upturned when the girl she loves asks for her help. Driven by love, Asra takes the risk to use her power to try to help Ina find her manifest. But in doing so Asra unwittingly sets off a chain of events that threatens the destruction of the entire kingdom.

In an effort to prevent things from getting worse, Asra follows a bloodthirsty Ina towards the capital. Along the way learns that what she was told of her ancestry may have been a lie. Soon Asra is journeying not just to stop Ina from doing something terrible, but also to try to find out who her parents really were and what her powers actually mean.

Set in a neighboring kingdom and centuries before the events of Audrey Coulthurst’s Of Fire and Stars, Inkmisstress is a fantastic prequel that beautifully fleshes out the world and the history of the lands Coulthurst has created. This book surprised and delighted me several times. I think I may have even enjoyed it more than Of Fire and Stars. It is a wonderful story of magic, love, and destiny that everyone should read.

Find this book on: Goodreads

Have a book you’d like me to review? Submit it here