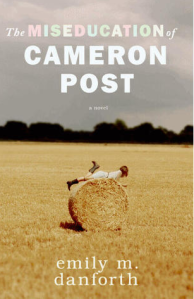 With The Miseducation of Cameron Post being made into a movie, I thought it would be a good time to reread this instant classic. The experience was full of surprises from the start. Firstly, I was shocked to discover that I didn’t own a copy of Cam Post, an offense which I very quickly remedied. And then, I began an adventure in reading it that was both familiar and brand new.

The Miseducation of Cameron Post follows the title character from her childhood through young adulthood in rural Montana. It begins with a shock as her parents are tragically killed in a car accident. Cameron’s first thought, in a heartbreakingly real depiction of how early internalized homophobia is learned by children, is that at least her parents wont find out that just the night before she was kissing her best friend Irene.

Homophobia, both internalized and external, is intertwined through the book as Cameron struggles with her identity. From a summer fling with a fellow swimmer to a more serious crush on a girl named Coley, Cameron navigates the grey area that is being young and gay in rural, Christian Montana in the early nineties. Danforth shines here, as she writes Cameron as both fearful of people finding out she is gay, and unwilling to be anything other than herself. When underclassmen are given the chance to attend Prom, Cameron goes along with a double date idea Coley comes up with, asking her guy friend to be her date for the evening. But she doesn’t lead him on at all. In fact when he confronts her about her feelings for Coley, Cameron does very little halfhearted denying before admitting that he is both right and that she still feels confused about her feelings. This will be a familiar moment to many who grew up in times and places where being gay wasn’t presented as a possibility; places where coming out as gay mean first reconciling with yourself that everything you’ve been taught about life is only part of a larger picture of possibility. These moments especially, when Cameron is caught between the world she was taught about as a child and these brand new feelings, are some of my favorites in the book.

At the same time she is working through her internal feelings, Cameron must also deal with the constant, pervasive homophobia that surrounds her. In such a small town, secrets rarely stay hidden, and when Cameron’s Aunt Ruth eventually finds out that Cameron is gay, she quickly sends Cameron off to a gay conversion program that doubles as a school. God’s Promise is part Christian camp, part school, part indoctrination center. Cameron plays along with the counselors even though she doesn’t want to or believe she can change. And by the end of the book (and the end of her first school year there) Cameron and two friends she makes at God’s Promise make a decision that both brings Cameron’s story full circle and opens it up to new possibility.

This book is as raw as it is beautiful. Danforth doesn’t shy away from the difficult truths of being a gay teen in rural America. Instead she leans into them, exploring the paradox that the discovery of one’s non-heterosexual sexuality can often be. As Cameron moves in and through the grey area of believing both the Christian community around her that tells her she is wrong, and her own heart that says she is not, I found myself reliving memories of my own childhood. Even though my own personal experiences were not the same as Cameron’s, Danforth captures the essence of gay youth so perfectly that you don’t need to have lost your parents or been sent to gay conversion therapy in order to understand what Cameron is feeling. It’s this balance of writing, and these difficult but beautifully expressed truths, that make this book such an important and worthwhile read.

Find this book on: Goodreads

Have a book you’d like me to review? Submit it here